We are launching a significant upgrade to our Financial data product with a number of major data quality enhancements for public companies:

We are also initiating coverage of private company data, with the addition of ~750k non-public entity profiles across companies and data on Funding rounds, investments, and acquisitions for both public and non-public entities.

Stitching interim filings together is simply not enough to make a model. With this release, we have brought broad-based Sentieo Exclusive improvements to the financial data from our data sources to address several specific edge cases and to bridge the gap between simple filings and off-the-shelf models. Some of these improvements include:

Better handling of data of SMB reporting in Thousands

Better handling of restatements and reclassifications:

We now also offer a Calendarized view, as well as NTM and LTM data, for all of our models.

We now offer a library of ~300 KPIs companies from where various sectors report in their financials. For example:

Every line of the ‘As reported’ and ‘Standardized’ models from Refinitiv for Banks are now available on EDT, Screener and Excel.

We are further improving our models with a fresh new look and improved table technology.

Every number in our models and ratios page now comes fully justified with a pop up demonstrating the formula calculation step-by-step. 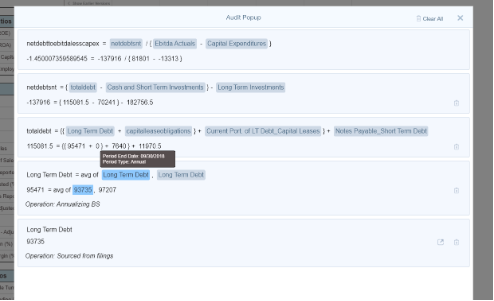 Model periods based on prior filings are now also available. Click on “Show Earlier Versions” to see a side-by-side comparison of any previous report for the period and the most recent update.

All ‘Standardized’ and ‘As reported’ periods come with useful information on the filing used to produce the numbers: these include the type of source file (eg: 10K), its date of publication, what was the purpose of the filing (update, restatement, reclassification, etc..) the currency in which the report was filed, and who was the Auditor and its opinion on the accounts. 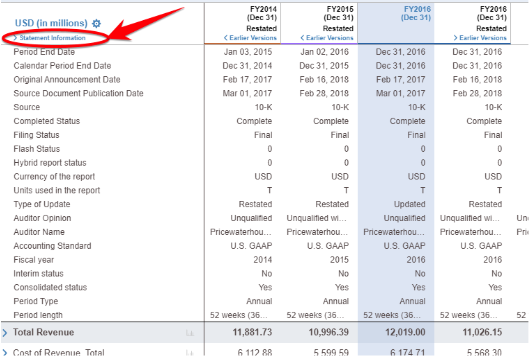 When you click on any number, a pop up will show you the history of the estimate for that number (up to today for future periods) or when the number was reported.

We have now fully onboarded Refinitiv Fundamental data into our platform, drastically increasing our field count from 138 to ~1500, and added multiple improvements and features on top for a rich and premium fundamental data experience. We offer multiple models, each with particular strengths and use cases.

Tools to turbocharge modelling in Excel

We’re introducing a set of new features to make it even easier to leverage our financial data in Excel.