Insider Transactions summarizes form 4 data so that you no longer have to tediously read multiple form 4s to determine the pattern of insider trading. The chart in the top left shows all insider buys and sells. Larger circles indicate larger transactions. A consistent pattern of large red circles would indicate that insiders are dumping their shares (which is not the case below). 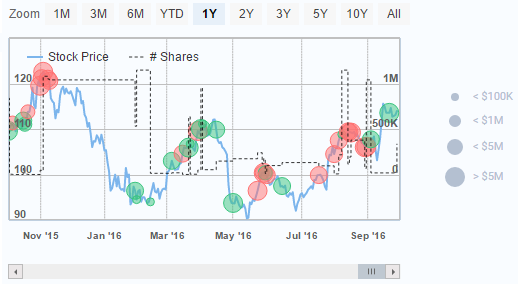 Click on the time periods at the top of the chart to change the zoom level (e.g. All).

Click on the name of any insider to see only insider trading from that particular insider. For example, we can click on Timothy D Cook (Apple’s CEO). 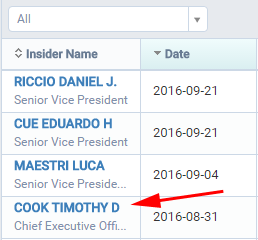 This will bring up a list of all of his insider trades:

The Shares and Post Shares columns will roughly indicate what portion of his personal stake he has sold. In the chart above, we can see that Tim Cook has been receiving stock from Apple (not shown in form 4s) and selling down his stake to maintain ownership of roughly a million shares in Apple. 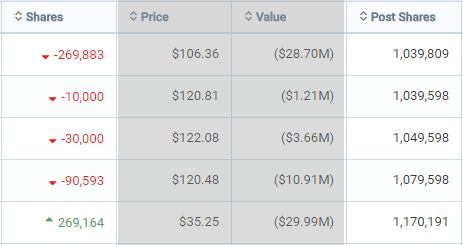 Note that form 4 filings do not always indicate unvested stock, RSUs, and other stock-based compensation that an executive may be entitled to. You may wish to refer to a company’s DEF 14A proxy filing for a more complete picture of an insider’s ownership.