We are re-launching our Financial model, with more useful fields, detailed data and a new fresh and user-friendly design.

We have added the following series to the Income statement model. It is therefore now possible to start from Revenue and walk the way down to EPS; all the key items in the Income Statement are now there. We are also making a clearer distinction between “As Reported” figures, and “Adjusted” figures, with the breakdown of all the non-cash and non-recurring items to go from one to the other. All the new series are also immediately available on Plotter, Screener, and Excel plugin. 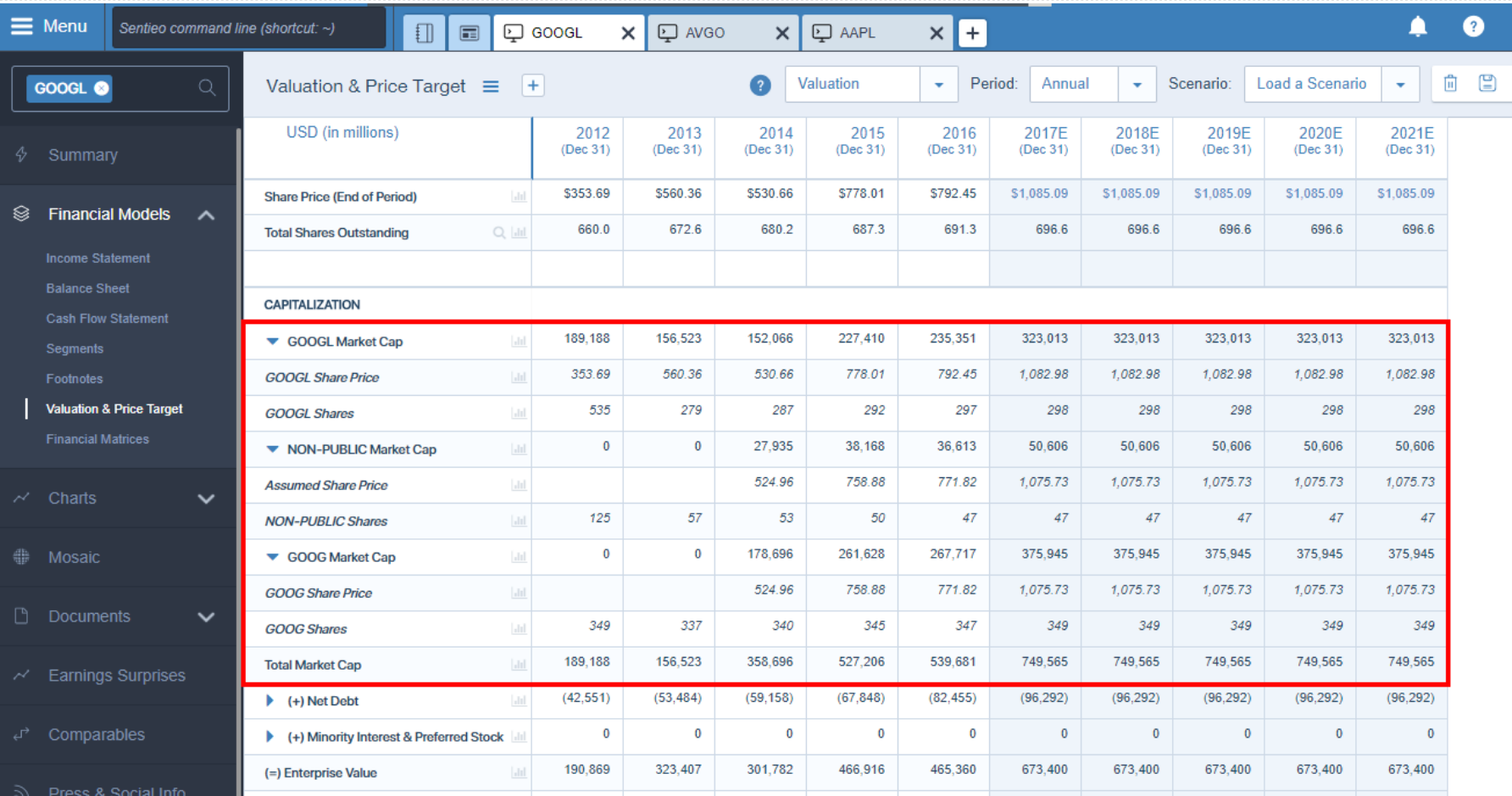 We have improved our market cap methodology, which add a layer of transparency which is handy especially for multi-share class companies. In the example below, we show that for GOOGL each of the share class market caps is calculated separately and adding up to the full company market cap. 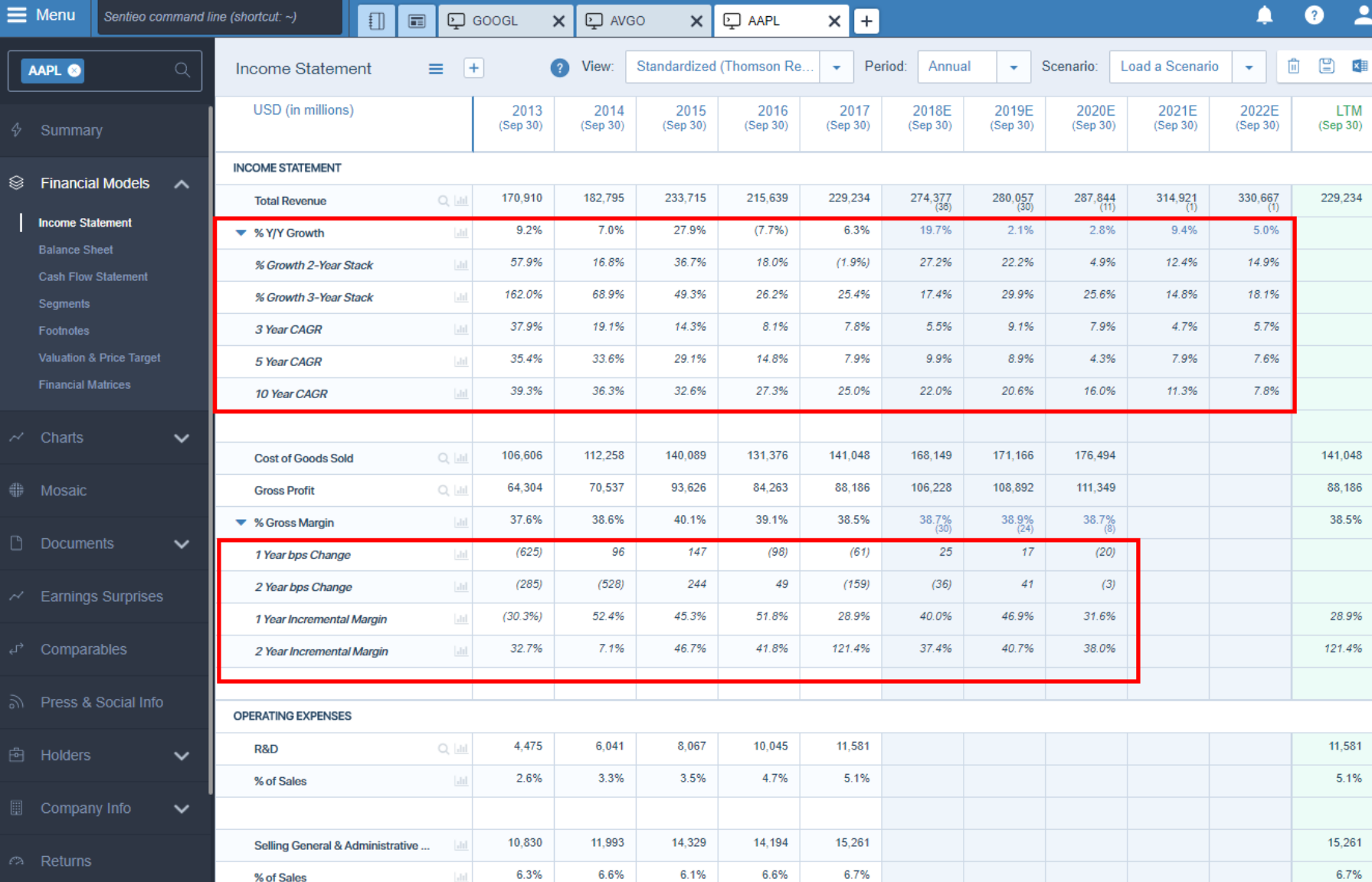 Growth rates have been added to the main stages of the Income statement to help further evaluate the ongoing performance of companies.

Likewise, Margin expansion measurements have been added to the main profit stages of the income statement

Both growth rates and margin measurements automatically update as you build new scenarios. 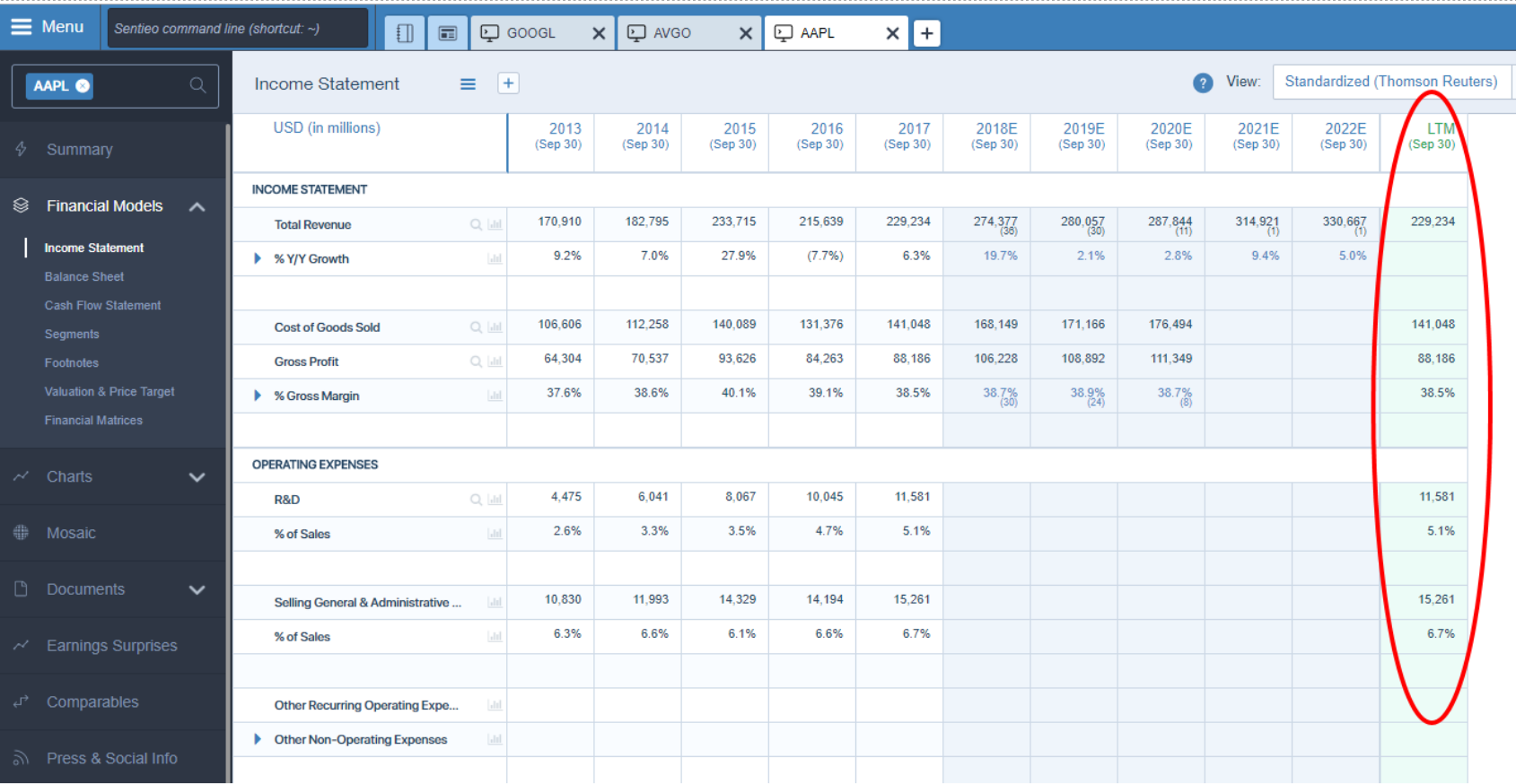 we have added the sum of the last reported 12 months in the far right column;

we are also introducing the full LTM Income Statement model, available in the Period drop-down menu. 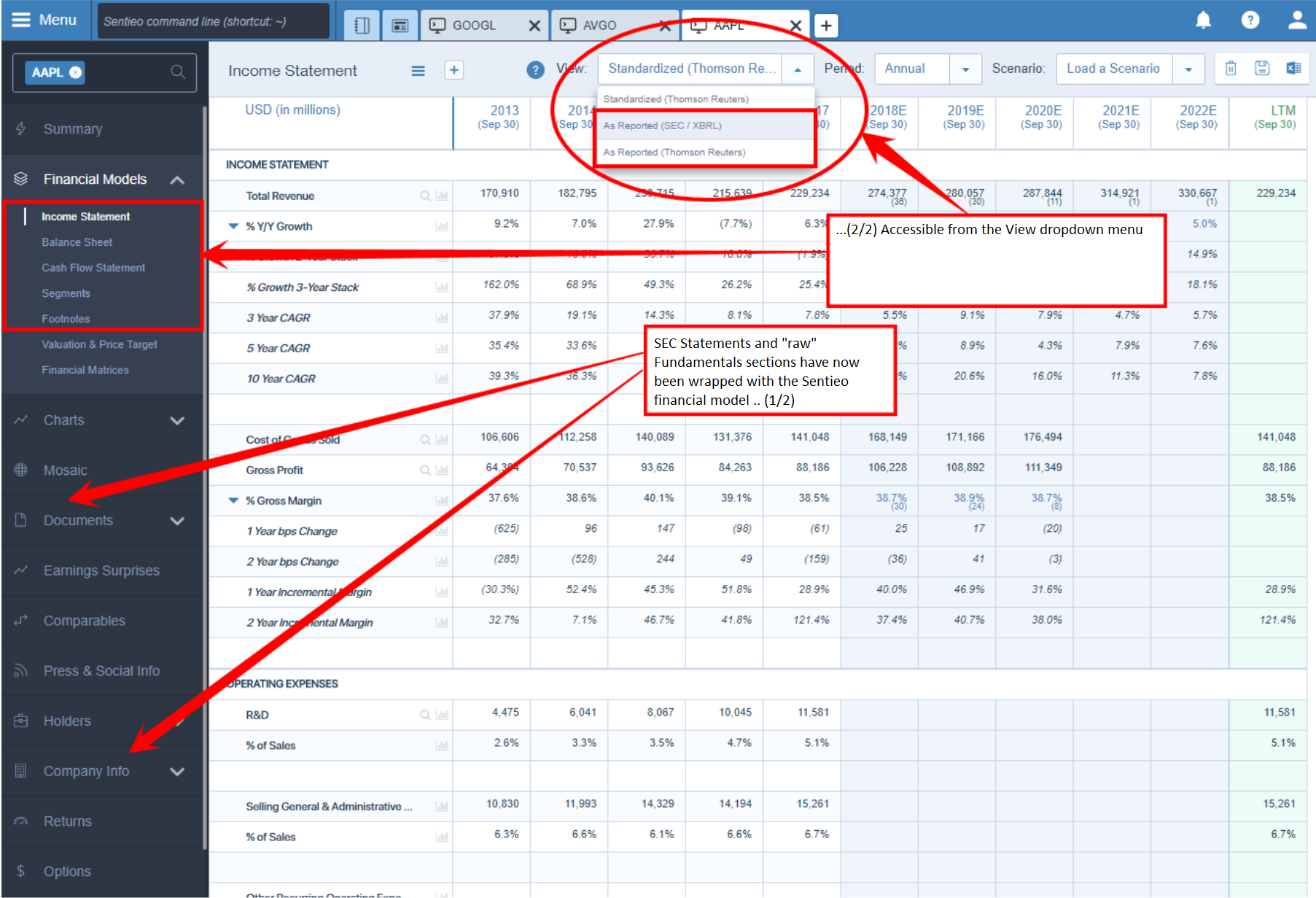 Previously, a user had to first select a source (Sentieo, Thomson Reuters, SEC/XBRL) then look for which financial statement item he required.

We have now grouped all the financial data sources into a more intuitive single menu. First the user decides which financial statement item he wants to research. By default, he will be taken to the Sentieo model. The other sources are available in a drop-down menu. 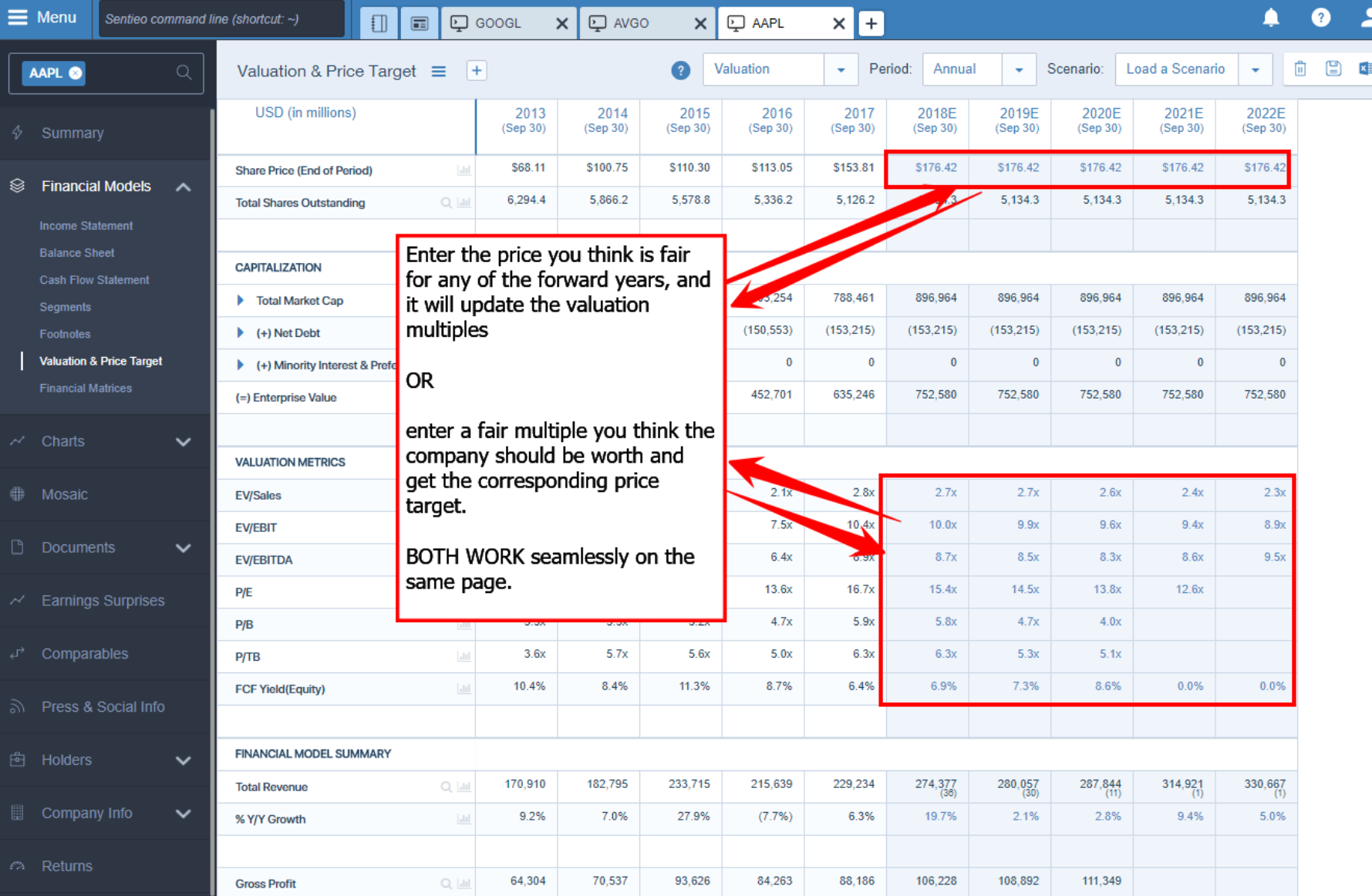 A powerful new feature we are launching is the valuation sheet. It takes target price setting to a new level of simplicity.

We now have a full global coverage of stock exchange-traded companies in all international geographies.

Please reach out to our customer success team with any question or feedback. All feedback welcome!